Album Review: IN by David Helpling 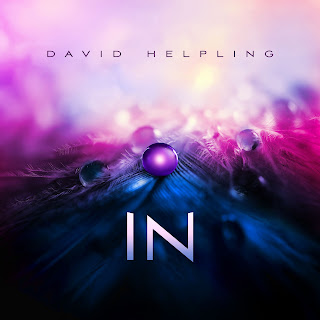 San Diego based guitarist and ambient composer David Helpling released his debut album Between Green and Blue in 1996 on Spotted Peccary Music and has remained one of the most prominent artists on the label’s roster – and in the ambient/electronic music scene. Since his debut album’s landmark follow-up release, Sleeping on the Edge of the World, Helpling has subsequently composed music for film, released collaborative albums with Jon Jenkins, and collaborative tracks with chill-trance acts like Tigerforest and ELEON. Following his first space-ambient solo electric guitar album A Sea Without Memory in 2017, Helpling released the more melodically dynamic and oceanic inspired RUNE in 2019.

As if coming full circle with his latest album IN, Helpling revisits the rhythmic hallmarks of his initial albums and collaborations with Jon Jenkins, incorporates signature elements of his more recent albums, and adds newer subtleties of world, vocal and classical touches to his magnificent compendium of sound.

Comprised of 13 compositions spanning 1 ½ hours, IN is characterized by lush ambient sound passages of liquid electric guitars, drifting piano notes and echoing tribal-esque rhythms. A lot of Helpling’s earlier work was stylistically reminiscent of Patrick O’Hearn’s – a welcome comparison he received much praise for – and I’m incredibly overjoyed that he’s re-incorporated a lot of that feel throughout as a seeming nod to his musical past. Nevertheless, there are certainly other previously unfamiliar surprises here; among them includes the worldly sample-like vocals of Nidhi Bhatmuley on “This Burning Sky”, a sensual and soaring epic chill-out track and one of my favorites on the album.

Additionally, Miriam Stockley of Adiemus and AO Music lends her distinctive ethereal vocalise to the songs “Slipping” and “I Too Am Coming Home”, while instrumentalist guest performances grace the songs “The Bliss You’ve Always Carried” (featuring Benjy Wertheimer) and “You Already Are” (featuring Matthew Schoening).

Essentially electronic yet inherently organic, IN caressingly washes over the senses like warm ocean waves with its silky sonic layers magnified by panoptic reverberation. Conveying a perpetual state of daydream throughout, experiencing the music is like passing through mirrored halls of sound – variably projecting mental images of swimming and flying, the sand and sea, and the sun and stars – in a breathtaking overview of planet earth.

Stunningly beautiful in and out, IN is another ingenious leap forward for David Helpling, recalling the nostalgia of many memorable ambient/electronic music releases of the 1990s and early 2000s yet creatively and technologically rooted in the present decade.