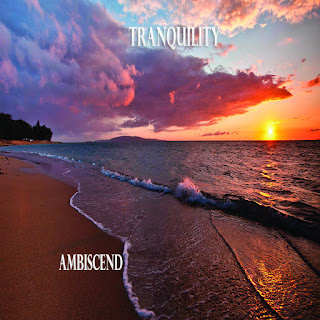 The album opens with the aptly-named and beautiful piece, “Time of Tranquility”, which is characterized by subtle major-key transitions comprised of metallic shimmers that seemingly evoke a blue sky streaked by cirrostratus clouds. Spanning a little under ten minutes, the composition is slightly reminiscent of the music of Deuter or Liquid Mind, as accompanying sounds of glassy chimes and singing birds enhance its lulling atmospheric tranquility. “Floating Enchantment” follows along a similar path with slowly-shifting synthesized tones, although this time accompanied by the nocturnal sounds of chirping crickets and gentle ocean waves that aptly convey a scenic nightfall. The tantalizing and mysterious, “Earth Sings its Song”, is easily my favorite – clocking in at ten minutes even. Here, shimmering swells and rolling waves allude to an underwater paradise that pleasantly reminds me of music from the album Journey to Atlantis by Kevin Kendle and Llewellyn. “The Night is Calling” continues with cascading waters washing upon glistening tones – until finally concluding with “Earth’s Bedtime”, on which chirping crickets return to the dreamy accompaniment of celestial chords and sparsely-spaced wind chimes.

An essential relaxation album, Tranquility would make a perfect aural accompaniment to massage, healing baths or other spa therapies, and easily joins the ranks of other top-notch contemporaries in the field! ~Candice Michelle