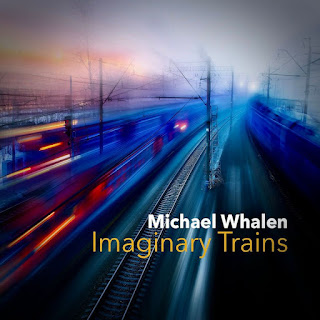 One consistent thing I’ve come to expect from Michael Whalen is that I never know where his endless flow of creativity will lead him next. A distinguished composer, producer and Emmy Award winner, Whalen effortlessly moves through various musical styles and influences ranging from ambient to jazz, film score, solo piano and experimental fusions of different genres.

His most recent album Imaginary Trains notably recaptures the melodic ambient and euphoric chill vibes of previous masterworks like Sacred Spaces and Dream Cycle, while at times incorporating subtle touches of the colorfully vibrant nu-jazz elements of his prior 2021 album Future Shock.

Comprised of eleven compositions spanning just under an hour, Imaginary Trains could be described as sleek and sophisticated ambient-electronica that mesmerizingly elevates the soul and ignites the imagination with its bubbling and buoyantly complex three-dimensional spheres of sound. Cycling and shimmering sequencer patterns characterize most of the arrangements, which are often led by soaring synth-horn melodies that convey a sustained mood throughout of emotional suspense and elegant sensuality.

From the opening title track, “Imaginary Trains”, the listener embarks on a whimsical voyage through a seemingly utopian dream-world that simultaneously feels tangible yet surreal. “Against the Sky” follows with an equally lush arrangement and sultry bass-laden chill groove that sends this piece to the top of my favorites on the album.

Whalen enlists the guest performance of Grammy Award winning artist Ricky Kej, who lends a delicate touch of Indian instrumentation on the third track “Across the World to Be With You”.

The fifth track, “The Wayward Sun”, is especially noteworthy for its glistening aquatic textures and haunting atmospheric tension that subtly recalls the mystique of Tangerine Dream’s film song classic “Love on a Real Train”.

The closing “Distance” features singer Donna Lewis whose breathy soprano voice casts a magical haze upon this dream-pop soundscape of serenity and sunshine!