An organic ambient chillout mix inspired by relics of the past. Composer and Multi-instrumentalist Rusty Crutcher has been producing and releasing music on his own artist-owned label, Emerald Green Sound Productions, since 1987. Having released seven albums in his historical/mythical-themed Sacred Sites Series, Oracle of Delphi is the latest installment inspired by Crutcher’s exciting travels to sacred sites throughout the world.

As the album title suggests, Oracle of Delphi takes the listener’s mind on a journey to a glorious mystical place in Greece’s ancient past – Delphi, a sacred precinct that served as the seat of the oracle, Pythia, who was consulted by people throughout the Mediterranean and beyond.

Comprised of ten compositions spanning just under an hour, the album seemingly guides us through shadowy portals and watery corridors that are perfectly illustrated by minimalist neoclassical and symphonic ambient vistas.

We sail away to an enchanted land with the dreamily foreboding opening piece, “Miriam’s Wish”, which is characterized by an understated orchestration of synths, strings, chimes and woodwinds.

The third track, “Aegean Reflections”, is one of my favorites, pleasantly recalling the album Journey to Atlantis by Llewellyn and Kevin Kendle. Here an ethereal coalescence of flowing strings, siren-like vocals and pulsating rhythmic undercurrent paint tranquil mental images of a mythical undersea kingdom.

The fifth track, “Apollo Awakens”, is another highlight that perhaps suggests a misty sea voyage amid towering mounting cliffs with its haunting duduk, eerie timbres and glistening bell tones conveying exploration and mystery.

The seventh track, “Pythia’s Trance”, is especially noteworthy for its earthy touch and hypnotic mood on which delicate panpipe and melodic percussion evoke veiled forest imagery.

If you enjoy fantasy film scores and video game soundtracks – and Greek mythology in particular – Oracle of Delphi provides a great musical companion for nighttime listening by candlelight or while reading an exciting novel.

For more information please visit the artist's website. Oracle of Delphi is also available at Amazon, iTunes, and more.

A symphonic electronic epos inspired by the music of Vangelis.

Dedicated in loving memory of legendary Greek musician and film composer Evángelos Odysséas Papathanassíou (3/29/43 – 5/17/22), known professionally as Vangelis.
on May 25, 2022

Album Review: The Moon's Within Reach by Karavan Sarai 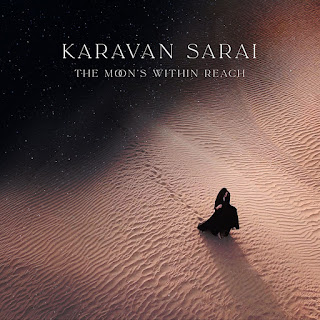 Karavan Sarai creates world fusion music that traverse landscapes spanning from the Middle East to South Asia. Their debut album Woven Landscapes (2015) along with the band’s follow-up releases Painted Sands (2018) and Torn In Love (2020) all peaked at high positions on world music charts and achieved much critical acclaim.

On their latest release, The Moon’s Within Reach, Karavan Sarai takes us on a mesmerizing journey inspired by Silk Road pathways and desert sands. Here you’ll discover the spirit of Egyptian, Arabian, Turkish and Indian music fused with the lush electronic creations of two-time Grammy-nominated producer and programmer Carmen Rizzo.

Instrumentalist, vocalist, composer and producer Narayan Sijan describes images of “Sufis playing music, whirling from the deserts of India to the Nile River and the Valley of the Kings in Egypt” and “fire in the sand dunes under a starry night” among his personal encounters and experiences which inspire his musical art-form, and are captured in the album’s two meditatively flowing compositions.

On the extended hypnotic piece, “Longing in the Stars" featuring Tabeah, the Turkish saz is brought into dialogue with the Egyptian oud which are encompassed by ambient textures sustained throughout. Transcendent male and female vocal melodies eventually join along, creating a colorful cultural tapestry that speaks to the depths of the soul as a sonic perfume fills the air with a mystical scent.
~Abdul Yamani for Journeyscapes Radio

For more information please visit Karavan Sarai's website. The Moon's Within Reach is also available at Bandcamp, iTunes and more.
on March 10, 2022