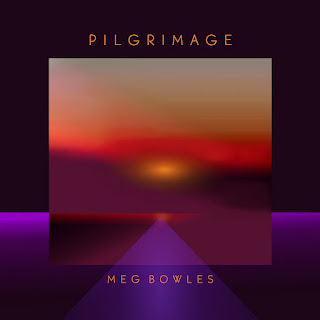 Meg Bowles began her musical journey as a flutist and classically trained musician before releasing her first two albums, Inner Space and Solstice Dreams in 1993, which launched her into orbit on the ambient/electronic music scene. She released the critically-acclaimed Blue Cosmos in 1996 – an album that was also my entry-point to discovering her music – which was subsequently followed by the release of From the Dark Earth in 1999. After a decade-long hiatus from recording new music, Meg triumphantly returned with A Quiet Light (2011) followed by The Shimmering Land (2013) and finally, Evensong: Canticles for the Earth (2018).

Returning in 2022 with Pilgrimage – a six-track album spanning just under an hour – Meg delights us once again with her classic signature style of electronic space music that has guided many listeners over the years through atmospheric sound worlds of contemplative beauty.

On one of my favorite pieces, “Cave of Secrets”, the organic sound of a water stream combined with minimalist piano drifting amid gossamer tonal mists, conveys melting icicles in a starlit cave and subterranean exploration.

At just under 13 minutes in length, “Mountains Reaching for Stars” is perhaps the most pristine piece on the album with its darkly expanding tonal waves of cinematic mystery, as intricate sound textures threaded among the ever-evolving synth-scape portray a sonic illustration of earth meets heaven.

Sending the listener dreaming into the night, “Source of Enduring Light” concludes the album with slowly interlocking high-and-low register tonal pulsations accentuated by a watery undercurrent, creating a most serene sense of being drawn to sleep beneath a canopy of stars by the sea.

A perfect album for late night listening, Pilgrimage is endlessly shaped throughout by hauntingly beautiful soundscapes imprinted with a sense of the sacred and reverent.