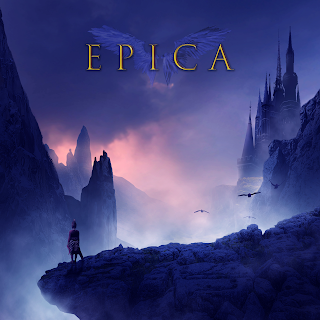 Keith Richie is an ambient/electronic music composer whose brilliant artistry I initially discovered a few years ago with his landmark album Ambient Highways, originally released in 2015. An emerging artist on the scene back then, I was equally enthralled by Keith’s subsequent releases including For the Willow Wept… (2012), Skylines (2016) and others.

Keith’s 2021 album Epica opens with “Remote Isolation”, gradually swelling in like an encroaching storm of descending clouds which are illuminated by distant female vocals. The mysteriously fog-filled “Rebirth” and “Dawn” follow in sequence with encompassing airy synth-pads and subtly melodic textures that further expand the inner visual-audio experience.

The next piece and one of my favorites, “Tiny Creatures”, conveys a twilight forest with its swirling synths and crystal-like keyboard notes imparting an emotionally stirring yet mistily serene atmosphere of innocence, melancholy and mystery. Another favorite, “Jade”, follows with classic electronic space sequencing set to a downtempo chill groove, relaying a futuristic dream-world of cruising and flying.

Saving the best for last, “There Are Other Worlds Than These” magnificently closes the album on a hauntingly sensual note with its pensively suspenseful melody and forebodingly thunderous drums. Whether alluding to other parallel or physical worlds seemingly just beyond reach, the piece brilliantly ignites the imagination with epic dreams and hopes of exploring new frontiers.

A must-have album for fans of Vangelis’ Blade Runner soundtrack and other sci-fi/fantasy themed music and film scores, Keith Richie continues to impressively deliver with each new album and single, securing his place among the finest ranks of electronic music’s next generation!