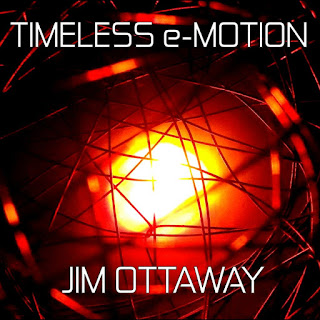 Jim Ottaway is an Australia-based electronic music composer with an impressive catalog of recordings that range from ambient-space to chill-out electronica. While his latest album, Timeless e-Motion, combines stylistic characteristics of both, it’s also a bit different from anything Jim has previously recorded. Namely, he employs greater elements of classic electronic space music in the vein of Tangerine Dream and Jean-Michel Jarre, all while infusing his compositions with a wholly up-to-date and modern feel via his vast arsenal of electronic music equipment and gear. Comprised of thirteen tracks spanning sixty-five minuets, the album was recorded, mixed and mastered by Jim between the years of 2013 and 2016.

“Sequence of Life” opens with a dynamic and rhythmic arrangement of sequencers and pulsing effects. A fantastic introduction, it conveys a feeling of moving through space and time. Following next is the hauntingly beautiful “Timeless e-Motion”, which gently paces along on a dreamily floating, liquid-like current. Easily my favorite piece on the album, hazy tones, scattering chimes and vocal-like washes are carried along by a hypnotic bassline and rhythmic pulse, which gradually evolves into a subtle chill beat. Digital bleeps and signals echo throughout, as if emanating from somewhere deep in the galaxy. At just over eight minutes in length, this piece could easily drift on forever, perhaps while one endlessly tries to solve the infinite mysteries of our vast and largely unknowable universe. Varying between the more dynamic, travelling pace of the first track and the floating ambience of the title track, the compositions always seem to move in a linear, forward motion. Each employs a varied degree of digital sequencing, synthesized vocals, spacey signals and pulsating electronic rhythms. The seventh track, “Behind Close Eyes”, is another especially notable and mesmerizing piece, which effectively brings to mind that of being in virtual reality or dreamlike simulation. Despite these distinctive sci-fi motifs, the compositions herein convey human warmth and a conscious presence throughout, as if musically illustrating a narrative of the cosmos and how it relates to life here on earth. Another favorite is the twelfth track, “Cosmic Shift”, a classic ambient-space number characterized by ethereal chords, sparkling chimes and a wondrous sense of mystery, as one can easily imagine numerous constellations of twinkling stars against a stark midnight sky. Aptly concluding the album is “Timeless e-Motion (radio edit)”, which clocks in at just over five minutes, lending itself as a sort of reprise of the title track to wrap-up this fantastical cosmic journey.

Jim Ottaway’s previous album, Southern Cross, was one of my favorite recordings of 2016 and this one is surely destined to become another. In fact, Timeless e-Motion may very well be the best output from this amazingly talented artist thus far, unquestionably solidifying Jim’s place as a distinctive and innovative electronic music composer. Fusing ambient, modern electronica and classic space music, I can detect several decades of musical influences here, as Jim masterfully carves out his own sound and style that he has both developed and gradually improved on over the years. Lending itself to an emotive sci-fi quality, the music of Timeless e-Motion conveys a mesmerizing notion of having entered some futuristic parallel dream-world that’s dominated by themes of hyperspace, wormholes and time-travel. Likewise permeated by an ever-present and intangible mystery throughout, this album is both an interstellar and inner voyage that’s absolutely not to be missed! ~Candice Michelle

Available at Amazon, Bandcamp and other music retailers. For more information please visit the artist's website.
on January 12, 2017