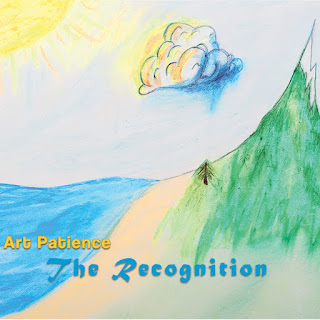 Having life-long experience playing the harmonica, Arizona-based musician Art Patience originally hails from a background in blues music. His debut album released on Heart Dance Records, titled The Recognition, not only offers something quite different from anything he’s recorded before, it’s also one of the most uniquely enchanting recordings I’ve heard in recent memory. Comprised of nine beautifully spellbinding compositions, Art imparts a soulful sultriness via his harmonica-playing among dreamily ambient soundscapes, which have been crafted by producer John Herrera, who also arranged, mixed and mastered the album. Art likewise plays acoustic guitar on several pieces, while guitarist Darin Mahoney also lends his talents on two compositions, including the fourth track, “Flight of the Butterfly”, and the seventh track, “Safe Journeys”. Upon first glance, the harmonica might seem like a rather unusual instrument to combine with ambient music, but this rare musical synthesis clearly works to perfection here.

“Compassion” opens the album with subtle acoustic guitar, as Art’s haunting and reverberating harmonica glides upon an enveloping soundscape of synthesizers that highlight many spacious notes and expansive chords. Seemingly lonesome sounding, I have always found the harmonica to be an instrument of solitude, and that essence certainly comes through on every one of these lovely compositions. The next track, “The Wishing Well”, is one of my favorite pieces on the album, initially beginning with the tranquil sound of the ocean’s tides rolling in and out with lone harmonica in the distance. A droning and resonating atmosphere enters the space, and I’m reminded of being on a beach as a darkening sky encroaches. A billowing, muffled rhythm soon follows at a gently parching pace, seemingly transforming the scenery into an overcast afternoon, in what feels like a confluence of nature’s power and serenity. Likewise, several other compositions feature audio-visually stirring environmental and nature sounds, including that of thunderstorms, running water and birds in the wild, as well as many ethereal textures and chimes sprinkled throughout the musical landscapes. These elements are especially exemplified on the aptly titled sixth track, “Spirit of the Woods”, which is comprised exclusively of lush environmental sounds and improvised harmonica intonations. Seemingly evocative of nature’s purest elements, it’s easy to imagine a man alone with nature in search of peace and solitude. Perfectly concluding the album is the gorgeous title track, “The Recognition”, a characteristically more spacey and nocturnal-sounding ambient piece that additionally features deeply hued and reverberating piano notes, as Art’s harmonica seemingly echoes throughout a vast terrain beneath a star-studded sky.

The Recognition is easily one of the most uniquely intriguing albums I’ve heard recently, boasting beautifully surreal soundscapes full of warmth, depth and mystery. Like an aesthetically alluring contrast of sorts, its compelling fusion of harmonica – an instrument that brings to mind the more arid regions of the mid and southwestern United States – in tandem with the dreamily liquid ambience throughout, felt perpetually evocative of a tranquil oasis in the dry desert. An outstanding work in its entirety, The Recognition will surely appeal to a wide range of listeners, although particularly those with a taste for gently understated though melodic ambient music! ~Candice Michelle

For more information please visit the artist's website. This album is also available at Bandcamp and Amazon.
on January 02, 2017