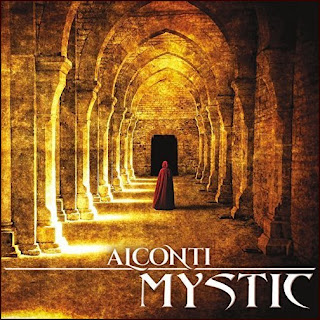 Al Conti is a Grammy-nominated recording artist whose latest album, Mystic, casts a seductive veil of enchantment upon a culturally rich and beautiful landscape. Beautifully packaged with artwork that visually captures the essence of the music just perfectly, the album’s nine outstanding compositions are likewise each accompanied by short stories that serve to further give the listener glimpses into the past. Conti wrote, arranged and performed the compositions, while two tracks (“Pilgrimage” and “Devotion”) were loosely based on traditional music that he arranged and adapted. Composed within a style that could perhaps be described as new age world fusion, the album draws most notably from Mediterranean, Near-Eastern, Persian and Indian cultural influences. A talented team of guest musicians throughout includes Grammy award-winning artist Ricky Kej, who serves as associate producer as well as lends additional programming, keyboards and harmonium. Vanil Veigas likewise provides additional programming, keyboards and santoor. Also joining the lineup is Jeff Pearce on electric guitar, Charlee Brooks on vocals, Pamela Copus (of 2002) on harp, Karthik K. on tabla, Butto on flute, and Jenevieve D’Silva on ghatam, cajon and assorted percussion.

“Mystic” opens the album with the solemn toll of a church bell followed by the reverent intonations of The Oxford Court Monk Choir. A stunningly beautiful introduction, it reminds me somewhat of the opening piece, “The Mystic’s Dream”, from Lorenna McKennitt’s The Mask and Mirror album. Jeff Pearce lends subtle brushes of electric guitar, as the soaring wordless vocals of Charlee Brooks join the monk choir – their voices collectively echoing among the halls of what feels like a vast cathedral hidden in the mountainous mists somewhere. An earthy and sensual rhythm comprised of both Indian and electronic percussion ensues, as the piece is carried along by a gypsy-like melody led by an arrangement of flute and other exotic instruments. “Trance” follows next and is one of my favorite pieces on the album, bringing to mind that of a night caravan trekking across the desert, as brushes of chimes remind me of twinkling stars spread across the sky. This piece is likewise supported by an earthy, sultry rhythm accentuated by Indian tabla drums, and showcases an exquisitely exotic melody comprised of santoor and harmonium. The more contemplative sixth track, “Contemplation”, is another favorite of mine which incorporates a distinctly Celtic flavor, blending ancient western and eastern musical influences to perfection. Showcasing Pamela Copus on harp, she leads the lovely composition with a lulling melody among a luxurious arrangement of instruments that include tabla, santoor and electric guitars. Another personal favorite is the seventh track, “Ritual”, which is dominated by an encompassing rhythm, as it seemingly paints a picture of festive lights and ecstatic dances by the Mediterranean seashore. Wrapping up this magical, mystical journey is the soulfully shining yet soothingly serene “Anima Aeterna”, which concludes with Charlee Brooks singing among of sea of both exotic and orchestral instruments.

Sensually imbued with a haunting mystique, Mystic could easily serve as the perfect soundtrack to an Arabian Nights tale. For comparison’s sake, those who are especially fond of more world-flavored works by Chris Spheeris, David Arkenstone and Loreena McKennitt are almost certain to relish this album as well. The music herein is earthy yet fiery, making the album a perfect companion for sacred dance and ritual. While listening to these breathtaking compositions, images frequently came to mind of temple dances, candlelit chambers and travelling nomads in the desert. A luxuriant weaving of cultures veiled in mystery, ecstasy and sensuality, Mystic is exemplary of new age world fusion at its finest! ~Candice Michelle

For more information please visit the artist's website. This album is also available at Amazon, iTunes and other music retailer & streaming platforms.
on January 30, 2017