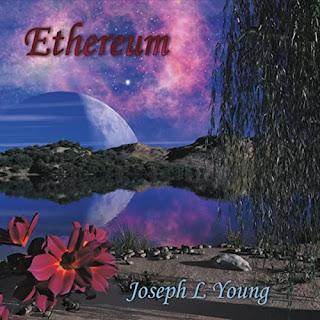 Joseph L Young is a world-flute master and keyboardist. His fourth album, Ethereum, is comprised of twelve beautiful compositions that showcase his multi-instrumentalist talents and keen ability to tap into the essence of music from various cultures. Among the instruments Joseph plays are Native American flutes, Chinese flutes, South and Central American clay drone flutes, Irish pennywhistle, and even Saxophone on one track. These exotic elements are deftly interwoven among indigenous percussion and atmospheric synthesizers, thereby lending an overall shamanic and trance-inducing quality to several of the compositions.

“Wavelength” opens the album with hazy tones and suspended chords that envelope a subtle flute melody. Serene and warmly-lit from the very first note, this piece brings images to mind of an afternoon sunset casting its beautiful glow over a rocky desert terrain. The title piece, “Ethereum”, follows next with a native-style flute that seems to echo throughout a vast canyon. This hauntingly beautiful and slightly forbidding ambient flute piece is likewise accompanied by droning synths, rainstick sounds and washes of chimes, which seem to evoke a sacred semblance of channelling an ancient wisdom or unveiling of hidden secrets. The comparatively lighter and more gossamer “Shimmers” ensues with Celtic harp and Irish pennywhistle, a delicate piece that conveys a fairytale-like medieval or renaissance flair. Changing scenery once again, “Boundless” begins with a low rumble and slithering sounds that introduce native-style flute and reverberating, slow-paced percussion, as hypnotic vocal intonations are echoed among its cavernous ambient soundscape. It is followed by the notably intriguing “Illumination”, a radiant piece that evokes images of a watery cave illuminated by sunlight pouring through. Here, piano and flute exchange dual melodies among a backdrop of chimes, Udu drums and atmospheric synths. Exuding both Celtic and Chinese overtones, “Free” is another piece particularly worth noting, which features vocals by Lenise Redding who sings a bewitching and mystical melody. Concluding the album is the beautifully nocturnal “Sapphire Moon”, which is guided along by subtle percussion and occasional shooting star effects, as a chorus of flutes seem to gently serenade the moon.

Brushed by colorful hues of various cultures throughout, it’s easy to slip into a deep zone while listening to this album. I’m especially fond of the many echoing effects and intricate textures throughout these beautifully relaxing and soulfully rejuvenating passages. With similarities that could be drawn to works by Scott August and Al Jewer & Andy Mitran, Ethereum is a wholly rewarding excursion into ethno-ambient flute music! ~Candice Michelle

Available at Amazon and other music retail & streaming platforms. For more information please visit the artist's website.
on November 30, 2016