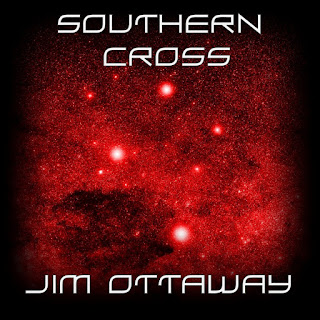 Southern Cross is the follow-up to electronic music composer Jim Ottaway’s highly energetic Invisible Vortex album. Named for a distinctive constellation in the Southern Hemisphere, Southern Cross is Jim’s first intrinsically ambient-space album since Liquid Moon, which was originally released in Australia in 2011, and later internationally in 2014. Comprised of six tracks spanning seventy minutes total, the album was recorded, mixed and mastered by Jim, as well as lovingly dedicated to the memory of his mother Madge who passed away in 2015.

“Alpha Crucis” opens the album with a rumbling vibration, followed by expansive chords and a rainstick-type sound, which frequently returns throughout the compositions. Imparting an immediate sense of deep space exploration, it’s fourteen minutes and twenty seconds of pure atmospheric bliss. Alluringly arcane, this mood is carried into “Beta Crucis”, where swirling chimes mimic a galaxy filled with twinkling stars. Moving into the darkest piece, “Gamma Crucis”, linear time seems to dissolve and physical distance is no longer a barrier to the furthest reaches of space. This especially noteworthy piece is permeated by a wonderfully eerie creepiness that’s filled with the sounds of deep drones, ghostly voices, alien signals and glowing pulsars. More traces of light shine through the vast darkness on “Delta Crucis”, as if drifting among a meteor shower – before giving way to “Epsilon Crucis”, the album’s warmest, most ethereal composition. Closing out the album is the phenomenal “Southern Cross (Timeless Motion)”, with its rhythmic pulse beaming like a quasar amidst swirling chimes and a melodious drone, before dissipating into a sea of stardust.

Sitting at the meeting point of both pure ambient and classic space music, Southern Cross is easily Jim’s most groundbreaking album to date. I frequently had to remind myself that the many otherworldly sounds herein were actually coming from a recording studio and not some distant location of the galaxy, thanks to the impressive array of state-of-the-art recording equipment and software detailed in the liner notes. An especially rewarding headphone experience, Southern Cross is a must-have album for both fans of ambient-space music and astronomy enthusiasts! ~Candice Michelle

Available at Amazon, Bandcamp and other music retailers. For more information, please visit the artist's website.
on April 15, 2016