Album Review: Beneath A Darkening Sky by David Arkenstone 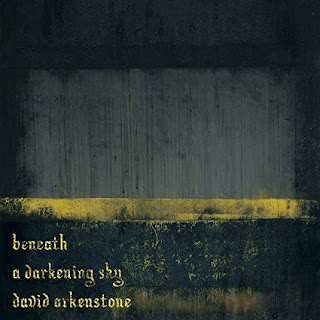 Recorded by candlelight during the winter season, Beneath a Darkening Sky is multi-instrumentalist and award-winning composer David Arkenstone’s boldest foray yet into dark neoclassical and haunting ambient terrain. Comprised of seven tracks spanning just under an hour, the compositions vary from seven to nine minutes in length. Composed, performed and produced by David Arkenstone on electronic instruments and synthesizers, as well as old-world instruments, he is joined throughout by Luanne Homzy on violin and viola, along with Susan Craig Winsberg on flute and Irish pennywhistle.

“The Fog” opens with earthy drones and hazy choral intonations as the piece gradually unfolds throughout. Anticipatory and foreboding while perhaps hinting that one is making their way through the fog of a dark forest, a pulsing bassline and tribal percussion soon follow along with the medieval sound of a harpsichord. The composition's shadowy mood continues on “The Deep Desolation”, where deep metallic echoes resonant like that of old church bells. These enchanting elements are soon accompanied by what sounds like a cross between Gregorian chant and a male opera voice, interlaced with shimmering and suspended oscillating strings. Next is the “The Storm”, which picks up more dramatically, imparting an ominous feeling that someone or something is on the arrival, as windy gusts and crashing metallic tones mimic lightning and thunder. Beautifully chaotic and disorienting, powerful drums seem to signal a heavy downpour, conveying the sights and sounds of twisting and winding tree branches among the blackening mists. “The Moonless Midnight” alludes to the phase of the new moon, when the night sky is the darkest. This composition conveys a dungeon atmosphere, as low drones and vocal intonations reverberate throughout its ghostly halls. A humming rhythm with the accompanying sound of a hang drum follow; one perhaps feels like they’re making their way through a secret tunnel beneath a medieval castle – torch in hand and all – while possibly trying to decipher cryptic writings on the wall. A cold winter’s eve is conveyed on “The Ice Forest”, a piece that feels distinctly Celtic with its added textures of wind and string instruments. Appropriately dedicated to J.R.R. Tolkien, “They Are Coming” boasts a cinematic soundscape of dark fantasy where mythical creatures populate a cavernous underworld. Opening with more windy gusts, “The Wind From the North” is the album’s final chapter. Swelling strings and minimal percussion lend themselves to the composition’s encapsulating suspense, until the eerie sound of a church organ signals its conclusion amidst swirling chilly timbres.

Magnificent and outstanding from beginning to end, Beneath a Darkening Sky is one of the most phenomenal albums I’ve heard all year, and easily sits among David’s finest works ever. He has incorporated many elements from both his Ambient.World and Music Inspired by Middle Earth albums – both of which are two of my personal favorites – while imbuing this latest masterpiece with an even darker, bolder sound. An undisputed genius at creating highly visually-stimulating and soulfully transportive concept works, Beneath a Darkening Sky is a must-have album for any Arkenstone fan, as well as those who love darker ambient, neoclassical and fantasy film music! ~Candice Michelle

For more information please visit the artist's website. This album is also available at Amazon and other retail & streaming platforms.
on August 01, 2016