Album Review: Return of the Star Elders by Lia Scallon 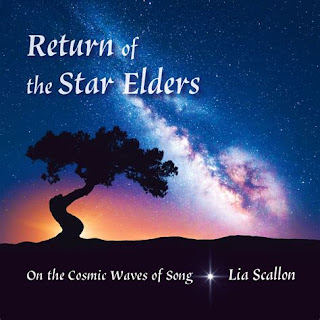 Born in Ireland and currently residing in Australia, Lia Scallon is an award-winning composer, producer and singer who’s released several albums through her Sounds of Sirius music label. Additionally, she leads “sacred travels” group tours and workshops that have taken her to enthralling locations around the world including the deserts of the American Southwest, jungles of Mexico, rainforests of Australia, and landscapes of Ireland.

Comprised of 9 compositions spanning just under an hour and 20 minutes, Return of the Star Elders, much like its predecessors, is inspired by Lia's mystical pursuits with an overarching theme of Pleiades and Sirius star-lore.

However, the most distinguishable feature throughout is Lia’s soprano vocals which variably conjure images of a fairy godmother singing in the woodlands, to that of an ancient temple Oracle incanting from high on a mountaintop.

Inside the liner notes are references to ancestral legends of diverse cultures and civilizations from antiquity (including those of Greek, Irish, Egyptian, Maya, Polynesian, Native American and Australian Aboriginal peoples), albeit related through the modern lens of theosophical doctrines and ancient astronaut theory, rather than from a scholarly standpoint of these various civilizations’ own mytho-historical origins. Nevertheless, from an aesthetic perspective, Lia’s artful compositions are rich with dazzlingly enchantment that effectively carry the listener away on a peacefully poetic and magical journey to sacred sites and mysterious places of natural wonder across the globe.

Subtle shamanic percussion underlies pieces like “Arrival of the Star Elders” and “Ancient Kachina Wisdom”, on which Lia’s primal-like chants seemingly echo throughout a nocturnal valley beneath a brilliant canopy of stars.

Compositions like “Isle of the Druids” and “Return to Lemuria” weave ethereal invocations and soothing ocean waves into a mist-filled soundscape that perfectly paint an idyllic environment tended to by nymphs, fairies and unicorns.

Listeners are also transported to the Himalayas on “Tibetan Skygods”, the Australian Outback on “Uluru Galactic Portal”, and the jungles of Central America on “Temple of the Maya”.

A mesmerizing audio-visual experience that can be described perhaps as “Constance Demby meets Medwyn Goodall”, Return of the Star Elders is quintessential earth-centered music well-suited for stargazing, spa therapy and communing with nature.
~Candice Michelle for Journeyscapes Radio

For more information please visit the the Sounds of Sirius website. Return of the Star Elders is also available at Amazon, iTunes and more.
on December 10, 2021