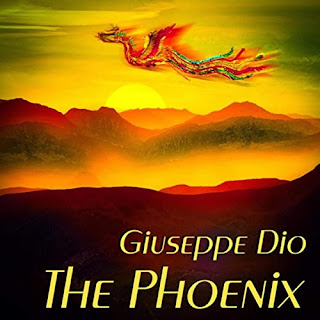 Giuseppe Dio is an Italian electronic music composer and photographer who has released several impressive albums ranging from atmospheric space to chill-out trance.

His most recent album, The Phoenix, is named after a mythical firebird that was said to come from paradise and fill the skies with its heavenly voice. According to ancient Greek legend, this creature was associated with the Phoenicians of antiquity, a maritime people inhabiting present-day Lebanon, who spread their empire throughout other parts of the Levant and Mediterranean coastal areas. Perhaps then, it’s more than mere coincidence that Giuseppe has effectively, even intuitively, rekindled the spirit of this mysterious civilization, and possibly even recalled a hidden piece of his own ancestral past through this magically magnificent album.

Drawing upon both vintage and modern electronic music styles across several decades, The Phoenix revisits much of the sonic framework that permeated his 2017 album Lights, Shadows and Colors, once again combining elements of ambient, trance-dance and electronic film score motifs.

Spanning 72 minutes long, The Phoenix is comprised of 18 dynamic compositions that majestically takes off with the first track, “Flight of the Phoenix”. Somewhat reminiscent of Jean-Michel Jarre, whirling cosmic patterns are expressed through melodic sequencing, choral-synths and thundering clouds of percussion.

Imparting a sense of euphoria, the hi-energy “Magic Freedom” ensues with bouncy keyboard notes amid a trance-dance beat, as one might imagine a phoenix flying over a fantasy island paradise.

The sensual yet transcendent “Rebirth” is easily my favorite track on the album, with its soaring lead guitar synths, dreamy vocalizations and encompassing slow-tempo drum-kick casting an imposing and mysterious presence throughout that pleasantly echoes Enigma.

“Long Road” is another magical highlight conveying a theme of both old-world and futuristic fantasy melded together, as a beautiful bell-tone melody is juxtaposed with robotic sequencers amid a fluid trance rhythm.

The mythical phoenix continues to soar on other soul-elevating favorites like “Over the Clouds” in fantastical adventure mode, which is introduced by mechanical bleeps that smoothly progress into an instantly memorable synth-string melody.

Concluding with the positively sublime “Sunday Morning”, shades of Vangelis imbue an epic chill-out soundscape set to a mid-tempo beat, as the phoenix flies away into the distant horizon.

Bearing stylistic similarities throughout to Jean-Michel Jarre, Energy 52 and Orbital, The Phoenix is classic European electronic chill and dance music that could be described as ‘dream trance’. Easily rivaling – if not topping – Lights, Shadows and Colors in terms of compositional arrangement, melodic beauty and the euphoric experience the album offers, The Phoenix is sure to appeal to electronic music fans across multiple generations past, present and future!