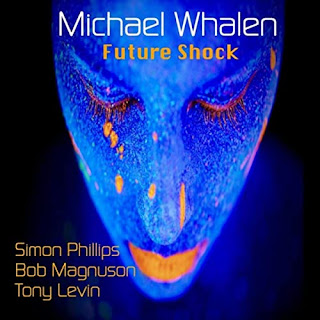 These days it seems nothing shocks us anymore. Still, good surprises are always welcome. Seasoned recording artist Michael Whalen’s newly released album of all original compositions is like opening a box of good and fun surprises.

Michael’s impressive, time-tested, and multi-faceted career in music, and his impactful contribution to the industry as composer, producer, Emmy Award winner, pianist extraordinaire including but not limited to his early new age compositions for labels such as Narada and Windham Hill are extensively and favorably written about in countless outlets and websites of many reviewers and publications. His music and interviews are featured on a wide variety of platforms.

In his latest recording creatively titled Future Shock, perhaps his most ambitious project to date, Michael pushes the boundaries of musical experimentation and challenges us to expand our vision beyond the confines of genre classification taking us into many spherical directions.

Future Shock is an energetic and uplifting wild menagerie of funk, jazz fusion, world, techno, instrumental jazz and nu-jazz with transitional elements of 70’s progressive rock. The album has an edgy, celebratory feel throughout, like a live outdoor festival concert.

For the project’s synergistic style and sound, Michael, who plays all keyboards, synthesizers, and electronic percussion on the album, assembled a fantastic team of incredibly talented and accomplished musicians, such as Bob Magnuson who lends his unique expressions on Saxophones, flute and shehnai, Simon Phillips, with incredible performances on drums and additional percussion, and Tony Levin sharing his outstanding talents on guitar, electric and upright Bases and Chapman Stick. Michael composed, arranged, programmed, and mixed all the tracks on the album.

The album kicks off with a blast as Michael takes the listener on a time-warp through musical styles. Starting the title track, he cleverly weaves a neon tapestry of psychedelic synth sounds and futuristic rhythms against a fluorescent backdrop of explosive drum work and base creating a blend of psychedelia elements reminiscent of the 60’-70’s rock group Emerson, Lake and Palmer whose influence Michael credits with inspiration. For me it also recalled the sound of Metro, an early 1990’s jazz-fusion band co-founded by the late great Chuck Loeb, one of my favorite jazz artists who incidentally was also a member of the 80’s group Steps Ahead which Michael mentions in his overview of the album as being an influence in his love of fusion.

The party continues with a funky rhythm in “Hop, Skip and Jump” as Whalen’s “groove-based” synth arrangements, Magnuson’s saxophone versatility and Phillips’ drum intensity masterfully conspire to blur the line between jazz and rock.

You will want to move to the breezy Latin rhythm of “La Hermosa Noche” the album’s third track, a very warm and spicy improvisation with a festive, bohemian feel. I found this cut as well as the fifth track “Memories of You” incredibly beautiful and almost reminiscent of some of The Rippingtons’ Latin-infused songs like “One Summer Night in Brazil.”

“Lights of Home” creates a sense of yearning for the familiar. This beautiful gem seems to emphasize lyrics are not needed as its slow, emotive saxophone-encased ballad and exquisite crystal-clear piano brilliance allow the melody to carry the imagination to its desired destination.

The pace heats up again as “Poly Jam” transports us back to the “trippy” side of things with its seemingly, disparate elements of sound, synthesizers, and deep-toned bass. Heavy drums drive the piece as a mystifying, sultry saxophone introduced at the end brings a sort of down-tempo calm to the finale.

Other positive mood-enhancers on the album are “Miracle Mile” with its lively tropical, smooth jazz vibes, and “Morning Song” with its cheerful tune creates a bright place of contentment, while “Wanderlust” is enjoyably fast-paced and dynamic, with elaborate chord progressions and full of fantastic busy rhythms that will have you toe-tapping in no time.

Beautiful saxophone and piano come together in the album’s last song “Your Eyes, Your Touch, Your Kiss” breathing romance and desire into its powerfully seductive, sexy, and hypnotic melody. It features repetitive notes throughout sprinkled with spicy saxophone segments, while a sublimely played, multi-layered bluesy piano builds climactic impetus then politely allows the sax to lead us softly to our reverie’s end with a feeling of sweet surrender.

Future Shock is like a time-warp of musical styles and sound; a surefire way to uplift your day no matter what may be happening around you.

If you are new to Michael’s music, I would like to recommend you go to his website where you can find more information on his background, recordings, and projects.

Future Shock is also available at Amazon, iTunes and more.
on June 14, 2021