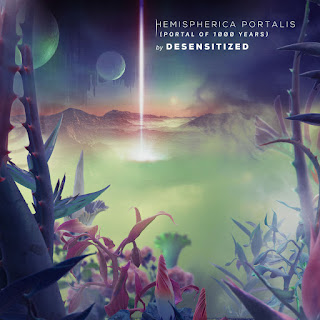 Desensitized is the musical duo of Deborah Martin and Dean De Benedictis whose collaborative debut album Hemispherica Portalis (Portal of 1000 Years) was released on the Spotted Peccary Music label in the fall of 2020. Comprised of 7 compositions spanning over 75 minutes, the music is accompanied by one of the most visually stunning and interpretive album artwork designs that I’ve seen in recent memory, courtesy of Daniel Pipitone. Additionally, Hemispherica Portalis was mixed by fellow Spotted Peccary Music resident Matthew Stewart and mastered by Howard Givens at the label’s studio in Portland, Oregon.

As someone who’s enjoyed Deborah’s and Dean’s previous individual and collaborative works with other artists, I was immediately intrigued upon learning sometime back of an upcoming collaboration between the two, particularly since the stylistic flavors of these two artists are quite distinct from each other. Deborah’s sound tends to occupy a more ethereal realm influenced by new age and world music leanings that often explores cultural, mythical and earth-centered themes. By comparison, Dean’s music (which also includes his works under the project name Surface 10) is overall darker, more experimental, industrial and alien with often glitch-like minimalist beats. And yet together these two have created a lushly hypnotic masterwork wherein the signature hallmarks of each artist merge seamlessly to form a new element like perfected alchemy.

Right from the opening title track one is immediately led through a deep exploration of fluidly freeform and blossoming patterns that seem to musically interpret varying biological metamorphosis and photosynthesis from an immersive, microcosmic perspective. Observational yet sensational in nature, familiar yet abstract aural textures paint a surrealistic dream-world that is strangely idyllic and beautifully bizarre. Shaped throughout by bioluminescent soundscapes that are distinctly electronic yet feel very much organic, the compositions move through simultaneously aquatic, biotic and mechanical sound environments that convey a strikingly vivid alternate reality.

Recalling at times the ambient classic Orchid by Ishq, Hemispherica Portalis offers a similar sonic immersion along with the hyperreal imagery it evokes. Easily one of the most stunning albums of the year, it's not only sure to remain a standout on the Spotted Peccary label but hopefully results in more collaborations between these two brilliant minds in the very near future! ~Candice Michelle