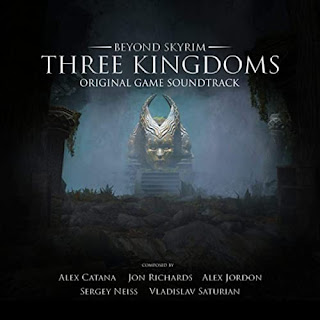 If you're looking for a phenomenal fantasy music soundtrack to immerse yourself in, especially during the colder months of the year, then you’ll certainly want to grab this fantastic set of music that spans over a sojourning six-and-half hours in length. Beyond Skyrim: Three Kingdoms (Original Game Soundtrack) is an extended collection of music by five different recording artists – one of them being Jon Richards whose excellent work I’ve been intimately familiar with for several years now via his past releases on Medywn Goodall’s MG record label. The other four artists in the impressive line-up include Alex Catana, Alex Jordan, Sergey Neiss and Vladislav Saturian – each of whom contribute a full album’s length worth of music in this expansive musical set.

Although not a gamer myself, I've certainly become quite a fan of the many atmospherically immersive soundtracks that much of the gaming world churns out – and this album is certainly no exception. As part of The Elder Scrolls action role-playing video game series, Beyond Skyrim is a cinematic blend of symphonic ambient and ethereal neoclassical music that ranges from atmospherically dark and minimal to brightly epic and celebratory. From thundering crescendos to droning soundscapes, Beyond Skyrim takes the listener on a fascinating journey though varied musical landscapes of otherworldly enchantment.

Like being transported back in time to a supernaturally mythical realm that simultaneously occupies earth-plane reality, the cultural and geographical backdrop for this listening adventure conjures images of cold northern European terrain where ancient Norse, Celtic, druidic and medieval legends are reimagined and revived through creative musical interpretation. In fact, fans of David Arkenstone’s Celtic, medieval and fantasy inspired works like Music Inspired by Middle Earth are particularly apt to enjoy this album, with similarly evocative imagery of castles, dragons, elves, wizards and mist-filled landscapes imbuing these compositions.

A thoroughly captivating collection of music that’s especially suited for autumn twilights and winter nights, Beyond Skyrim: Three Kingdoms naturally serves as a perfect listening companion for avid readers especially of fantasy novels, who will easily find themselves lost for hours in whatever fascinating storyline they choose to embark on! ~Candice Michelle
Available at Amazon, Bandcamp and other online music retailers.
on November 29, 2020