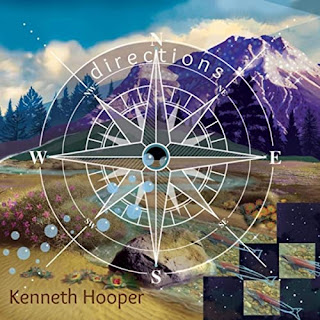 Kenneth Hooper is a Texas-born composer and assorted flute player who initially started out playing bass guitar. In 1994, after moving to Redwood, California, he picked up his first flute at a penny whistle workshop, which eventually accompanied him everywhere while on a subsequent trip to the Amazon jungle. Upon returning to the states, he was gifted a Native American flute that he also learned to play. This led to the formation of a musical duo with his friend Garth D. Brooks under the name Elysium Calling, with whom he released two albums. Another creative path would open up for Kenneth when he entered a healing arts certificate program in San Francisco called Sound, Voice and Music, which led to the subsequent release of his debut solo double-album titled Directions.

Characterized by spaciously woven organic soundscapes ranging from gently uplifting to deeply lulling, the album features Anasazi and Chinese Xiao flutes as lead instruments throughout. Likewise, both Udu and Rav drums add an entrancing quality to several pieces, while melodic acoustic guitar gives a notable Americana flavor to three of the nine tracks total. Disc one is more rhythmic while disc two is more meditative, with the second half of the album especially emphasizing the incorporation of many nature sounds along the way, including whale-song, ocean waves, singing crickets, a flowing stream and windy effects.

One of my favorite pieces, “Directions”, beautifully opens disc one with a super-slow shamanic drum pulse, as flutes, shakers and thunderstorm effects soon enter the picture and gradually pick up pace throughout. Native female vocal chants further enhance the Southwest American atmosphere of the composition and collectively calls imagery to mind of a darkening sky over vast canyon terrain.

A highly praiseworthy album overall that touches on ambient, acoustic and ethnic fusion musical styles, Directions is the perfect listening experience for anyone drawn to the essences of the earth via beautifully harmonious sounds! ~Candice Michelle
Available at Amazon and other music retailers. For more information, please visit the artist's website.
on September 10, 2020