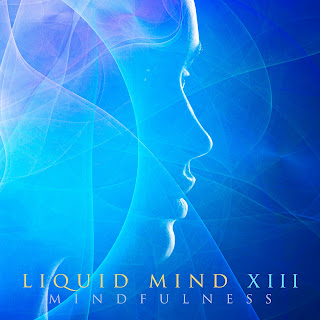 Liquid Mind is the successful longtime recording project of veteran musician Chuck Wild, whose music career of more than 40 years boasts some noteworthy accolades and highlights. Prominent among these includes his keyboardist days with the 80s-rock band Missing Persons (alongside bassist and latter-day ambient musician Patrick O’Hearn) as well as studio work with Michael Jackson in the 90s. However, the introspective musical sphere that Wild occupies as Liquid Mind, which saw its inception with the album Animus Minimus in 1994, is a notable contrast to the more bustling pop-rock world that he formerly immersed himself in. Having released sixteen Liquid Mind albums to date, Wild’s peaceful music has garnered a well-earned listener following with his works being especially popular in the spa, massage and wellness industries.

Titled Liquid Mind XIII: Mindfulness, Wild’s latest album is named for what could be deemed the most popular new age trend to arise over the last few years. However, for the dedicated mindfulness enthusiasts out there, as well as those less familiar with what the practice entails, it’s worth noting that Liquid Mind has long been a leading mindful music trendsetter by crafting harmonious sounds which are intended to promote many of the same purported benefits that mindfulness exercises strive to achieve.

Spanning just over an hour, the album features a total of six soothingly serene soundscapes comprised of slowly-shifting and oscillating major-key chord progressions, which mostly occupy the mid-to-high range. Continually unfolding throughout in a gradually ascending motion, silken chords with softened edges smoothly transition from one to the next. Given that the compositional structure is all ‘release’ and no ‘tension’, there aren't any elements of surprise along the way, which allows for the listener to simply achieve an uninterruptedly passive state of mind. Overall, it’s a listening experience which could be figuratively compared to that of floating like a cloud in the lotus position without pause, nor a tangible destination in mind.

Without getting too bogged down in genre categorization, I’ve always perceived this kind of music to be an emblematic representation of the new age genre, which I intuitively distinguish from the often overlapping yet nonetheless distinct ambient genre. Specifically, Mindfulness is positivity-minded, pure relaxation music that feels like receiving a mental massage or aromatherapy for the ears. And though as a listener I do tend to gravitate towards moodier atmospheres that convey some suspense and tensity, likewise, as someone coming from the perspective of having worked in the spa industry, I’ve found this type of music to be perfectly suited to that environment with its oft-reported therapeutic effect on both clients and holistic practitioners! ~Candice Michelle

Available at Amazon and other musical retail & streaming platforms. For more information, please visit the artist's website.
on August 25, 2020