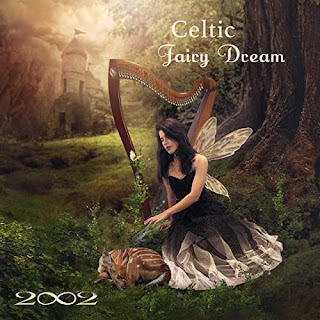 Originally comprised of husband and wife duo Randy and Pamela Copus, multiple award-winning and Billboard charting phenomenon 2002 debuted on the music scene nearly three decades ago with their album Wings (1992). Progressively evolving over the years to incorporate more lyrical and tangible melodies into their definable 'neoclassical new age' sound, more structured songs would eventually become a mainstay when the couple’s then-adolescent daughter Sarah Copus was officially recruited as 2002's third member and lead singer in 2014 for their landmark album Trail of Dreams.

A thematic sequel to Celtic Fairy Lullaby (2016) and follow-up to A World Away (2018), the band’s latest release, Celtic Fairy Dream, serendipitously parallels the maturing artistry of Sarah Copus, with her angelic lullabies once again shining in the incandescent glow of celestially sailing soundscapes. Comprised of cinematic orchestral and synthesizer arrangements, listeners are treated to the lulling sounds of harp, flute, guitar and additional multi-layered vocals throughout. Included are several renditions of traditional Irish and Welsh songs in signature 2002 fashion, as the musical sojourner is spirited away to another time and place where ancient lore and mythic beauty comes to life.

Of particular noteworthiness is “The Green Fields of Autumn (Coinleach Glas an Fhomhair)”, a traditional Irish song popularized by the legendary Irish band Clannad. Although both renditions are equally exquisite, 2002 contrasts Clannad’s mainly acoustic and earthier version with one that's more ethereal and shimmering.

My absolute favorite piece on the album is “David of the White Rock (Dafydd y Garreg Wen)”, a solemn 18th-century Welsh musical air and folk song. With the harp central to its poetically lyrical theme, 2002's gorgeous rendition aptly showcases the enchanting instrument, while the soundscape simultaneously exudes both a monastic and romantic atmosphere. Visions of majestic castles and mythical lands emerge from its velvety mists, as Sarah imparts a haunting melody in the beautiful Welsh language.

Another stunning offering from 2002, every composition herein magically unfolds like the turning of sparkling pages of a fairytale picture book. Sure to be embraced by many adults and children alike, Celtic Fairy Dream is another must-have album for fans of Celtic, ethereal and fantasy music in the spirit of Enya, Clannad and Loreena McKennitt! ~Candice Michelle

Available at Amazon and other music retail & streaming platforms. For more information, please visit the artist's website.
on August 17, 2020