Album Review: Beyond the Purple Sun by Jim Ottaway 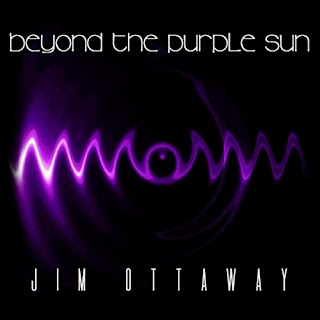 Beyond the Purple Sun is Australian music composer and synthesist Jim Ottaway’s 2019 conceptual sequel of sorts to his 2017 album Deep Space Blue. It’s also his chronological follow-up to 2018's Yesterday Passing, a comparatively more upbeat and contemporarily melodic album that was nicely nestled in between the two deep space listening excursions.

Although Ottaway has been releasing music for several years now, his earlier works were initially only available in his native Australia, until he later re-released them on the global market. Eventually, his landmark space-ambient album Southern Cross hit the scene in 2016, which quickly earned him notable praise and airplay in the Western Hemisphere. Later that same year, he released the more digitally dynamic and retrofuturistic Timeless e-Motion, my personal favorite Ottaway album to date.

Comprised of seven compositions, his 13th international release features music that was recorded from 2010 to early 2019, thereby echoing many hallmarks of his other space-ambient works released over that time-period.

As another imaginative sonic voyage to the limits of the known universe, Beyond the Purple Sun further expounds on the artist’s impressions and explorations of magnificent cosmic panoramas. Possessing intriguing song titles such as “Celestial Rainbows”, “Lavender Moons” and “Birth Of A Violet Quasar” – all of which deliver as much beauty and intrigue as they seemingly promise – the music herein often paints images of ultraviolet-illuminated celestial objects and plasma energies lighting up a black expanse. Imparting feelings of floating and weightlessness, ethereal intonations tantalizingly call from afar like intercosmic transmissions of incorporeal voices; while prismatic icy shimmers and crystallized modulations intermittently rain upon undulating drones and gurgling signal sounds throughout. Finally arriving at the hypnotizing title piece, “Beyond the Purple Sun”, a steadily forward movement is illustrated by the sustained vintage rhythm of pulsating sequencer patterns.

Continuing to impress and expound with each recording, Jim Ottaway has become one of today’s preeminent composers of ambient sci-fi and space music. Thoroughly immersive and transportive, Beyond the Purple Sun is definitive deep space listening for lovers of astronomical mysteries! ~Candice Michelle

Available at Amazon, Bandcamp and other music retail & streaming platforms. For more information, please visit the artist's website.
on April 02, 2020