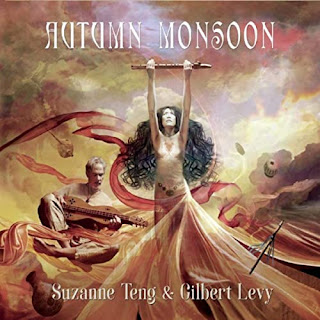 Married musical partners Suzanne Teng and Gilbert Levy create outstanding global instrumental music that is often meditative yet movement-oriented. They also release music as part of an ensemble group called Mystic Journey (which also includes band members Dann Torres and Jon Ossman) whose previous album, Kingdom of Mountains, made a lot of noteworthy impressions in the scene. The duo’s latest album, Autumn Monsoon, is certainly no exception and I’ve been thoroughly enamored with it ever since the first listen.

Originally from Berkley, California, Suzanne is an acclaimed world flutist who holds a Master’s degree in music from Boston University’s School for the Arts. Having released several albums to date including solo recordings, her music has garnered critical praise in mainstream publications and she’s performed live on national television. Not only does Suzanne play all the flutes from the Western flute family, she also plays an array of indigenous flutes from around the world including Native American, African, Asian, European and Middle Eastern varieties.

Born in raised in New Orleans, Louisiana, Gilbert began playing drums at an early age, later going on to perform professionally in bands and clubs located on the famous Bourbon Street. Eventually, he made the transition from mostly playing in R&B, jazz and pop music bands to playing world drums, notably African and Middle Eastern hand percussion as well as the metal melodic Hang. He’s also expanded his global musical palette to include several stringed instruments.

Comprised of ten enthralling compositions spanning approximately forty-eight minutes, Autumn Monsoon invites the listener for a mesmerizing musical sojourn across India, West Africa, the American Southwest, the Saharan desert – and even making a stop at the Andromeda galaxy along the way. Suzanne opts for Native American flutes as the main navigator throughout this album, while Gilbert gently propels the voyage along with a multi-cultural array of percussion. In between these prominent instruments, exotic strings and synthesizers are layered in, with added contributions along the way from Jon Ossman on Indian dilruba and Dann Torres playing both nylon and steel string guitars.

Opening with the title track, “Autumn Monsoon”, we’re immediately greeted by the soothing sounds of Native-style flute and the lovely tonal melody of Hang, a percussive instrument that has long been one of my favorites. Added bass dulcimer and a synth-beat join in for an organically downtempo rhythm, as all the musical parts collectively create a warmly intoxicating sonic brew.

On “Indian Sisters” Suzanne plays an enchanting flute melody to the seductive rhythm of shakers, tabla and udu drums. Enticingly sensual and one of my favorites, this fluid composition seemingly moves along in coy, serpentine fashion. We’re also treated to the hypnotic pulse of frame drum on the mysteriously nocturnal “Traveler”, which additionally showcases a nomadic flute melody and woodsy strumming of the Turkish saz.

Imparting an American southwestern feel, the equally stunning “Canyon Ghosts” is led by a slow drumbeat with a pulse that seemingly connects to the heart of the earth. Gorgeously complimenting it is an echoingly distant flute melody accompanied by another one brought more to the foreground, as the music effectively occupies a space where ancient spirts dwell and secrets of the stars are pondered.

Like a waterfall washing over the senses, “Sueños” (meaning “dreams”) is perfectly illustrated by lulling synth-tones coupled with entrancing flute and percussion. Fittingly paired with the ensuing “Andromeda”, this hauntingly tranquil piece turns one’s attention towards the night sky with its reverberating flute melody amid a softly sustained synth-drone.

Overall characterized by fluid rhythms and encircling atmospheres, Autumn Monsoon is an alluringly beautiful and earthily sensual output from start to finish. Every melody, tone and space in between conveys a sense that these musicians were focused yet relaxed during the album’s creation. Simply one of the finest achievements in the overarching style of ambient-world music that I’ve recently discovered, Autumn Monsoon offers a remarkable transcontinental, trance-shamanic journey that listeners will want to embark on repeatedly! ~Candice Michelle