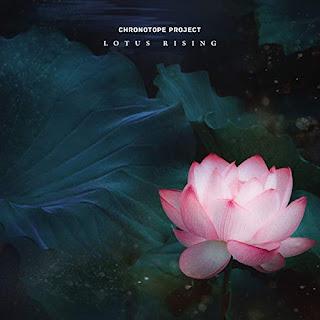 Following-up the fantastic album Ovum released in 2017, Chronotope Project returns with another stunning release on Spotted Peccary Music titled Lotus Rising. An Oregonian-based electronic music composer and cellist, Jeffery Ericson Allen is the musical architect behind Chronotope Project, with the artist’s latest album drawing upon his thirty-year study and practice of Zen Buddhism. The most recognizable symbol in the Zen tradition, the lotus is a strikingly beautiful flower that only grows in mud, opening its flowers one-by-one in the light of the sun, only to sink back under the murky waters again at night. Comprised of eight compositions spanning nearly an hour, the music tells “the story of an aspirant’s journey of self-actualization on the Buddha Way” and stresses “the importance of the moment”. Likewise, Lotus Rising musically unfolds and transmutes along its captivating course, as if being artfully synchronized to the vivid imagery it evokes of this inspiring phenomenon beheld in nature.

Introducing the album is “Crossing the Great Water” with a rhythmically continuous stream of watery sequencers that are punctuated by extended arcs and tonal stretches of Haken Continuum Fingerboard. An integral component of Chronotope Project's signature sound, the hauntingly mesmerizing quality of this unique instrument often acts as the lead ‘voice’ on these lushly hypnotic soundscapes. Following next is the stunning title piece, “Lotus Rising”, in which the murky depths of the unknown seemingly blossom into an outward unfurling towards the light. Fluidly woven together, the piece gradually evolves with increasing layers in a spiraling motion, eventually culminating in a sound collage of multi-textured, electro-organic luminescence. Also noteworthy is the darker-hued and three-dimensional “Opening the Hand of Thought” with its churning sequenced rhythm, as the occasional dash of chimes seemingly pierce its veil of atmospheric density. Perfectly concluding the album is “Homage to the Three Jewels”, which effectively hybridizes sequenced patterns with subtle world percussion. Seemingly evoking a sense of having embarked on a long sojourn to a faraway hidden place, this subtly-driving piece is further mysteriously illuminated by the distant chants of Buddhist monks.

An avid fan of Chronotope Project ever since having heard the first of Jeffrey Ericson Allen’s four albums released on Spotted Peccary to date, Lotus Rising easily ascends to the top of this artist’s already impeccable body of work. Intensely enthralling and profoundly sensuous, Lotus Rising epitomizes a particular kind of affecting beauty and indescribable depth that can only be achieved via the inspiration and application of an authentic sacred tradition. Arguably one of Spotted Peccary’s finest on the label’s remarkable roster, Lotus Rising is a hypnotic masterpiece of tribal-esque ambient and electronic (inner) space music!
~Candice Michelle for Journeyscapes Radio

Lotus Rising is available at Spotted Peccary Music, Bandcamp and Amazon.
on December 14, 2018