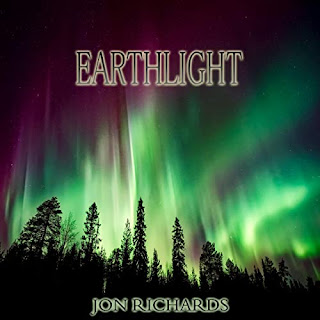 Earthlight is the sixth album from musician and composer Jon Richards. Comprised of eight compositions spanning just over an hour, the album showcases a beautiful array of electric guitar melodies and textures, perfectly interwoven among encompassing synthesizers, electronic rhythms and ethereal voices throughout.

The title track, “Earthlight”, opens like an approaching dawn, introduced by warm, enveloping synthesizers and gentle guitar plucks. Encroaching drums soon give way to a steady electronic rhythm, as the piece takes on a more cinematic quality full of keyboard layers and soaring electric guitar that collectively impart a feeling of flight. “Falling Star” continues in this mode while introducing cello, as exotic female vocals lend a touch of world to the piece. The leisurely-paced “Daybreak” is one of my favorite compositions, which showcases a gorgeous electric guitar motif along with cello and airy bells. “Satellites” takes things up a notch with more dynamic electronic elements, as the familiar female voice injects a worldlier feel into its spacey arrangement. “Afterglow” is especially dreamlike, in which choral voices and ethereal guitar soar among echoing drums. The aptly-named “Solar Winds” opens with the sound of cosmic winds that eventually morph into a melodic and mesmerizing chill-style arrangement. “Eternity” is initially led by the sound of Dakuk, a gorgeous instrument from Armenia that I’ve long been particularly fond of. Clocking in at nine-and-a-half minutes, it’s the lengthiest track on the album, in which all of the familiar elements mark their presence throughout. “Majestic” signals the end of our stratospheric sojourn, concluding with a mystical female voice that seems to represent Gaia herself transmitting a secret message into the ethers.

Infused with a global spirit and cosmic sensibility, Earthlight seems to behold our earth in all of its glory. I was often reminded of Mike Oldfield’s longtime seminal work, The Songs of Distant Earth, especially with regard to the album’s overall concept, as well as the electric guitar as its lead instrument. Magnificent and moving from beginning to end, Earthlight is easily Jon Richards’ best album to date, as well as one of the most beautifully inspiring recordings I’ve had the pleasure of listening to all year! ~Candice Michelle

Available at Amazon and other music retail platforms.
on September 20, 2016